With summer approaching in the western hemisphere I didn’t think I’d be writing a post like this some 3/4 weeks ago. I could only envision the closest I’d get to such a post would be ideas/substitutes for those wanting to train outdoors with the arrival of Summer season.

But here we are and never before has there been such a demand for quality home workouts/workout advice/workout ideas. Prior to the COVID19 saga home workouts would have been written off and thrown in the trash under the ‘seriously sub-optimal’ label and forgotten about. None of you would be seen dead doing a chair yoga workout your grandma does, would you?

So, are home workouts actually not as good as gym based workouts, or can they be just as effective?

Obviously as a calisthenics enthusiast/coach my answer might be slightly biased but I genuinely believe when you know enough about bodyweight training and all the variations engulfed in the bodyweight world, you can get just as good results as you can with weight training, for 95%+ of cases.

This statement has grown ever popular courtesy of the masses’ favourite gurus on social media who are know throwing out supposed ‘calisthenics’ workouts by the dozen. This doctrine has really got up the noses of the calisthenics purists who simply don’t want to see the training style that got them so strong and athletic, being labelled as Jane Fonda-esque ‘workouts’.

Alas, the generic trainers and coaches who are far from experts in this field, are ignorantly putting out super high rep circuits involving movements that have been stolen from an insanity DVD, as opposed to what any calisthenics coach would ever prescribe.

With that cleared up, the bottom line is as follows: resistance is resistance and can be created by a multitude of ways. I’ll share 5 of my favourite ways to make basic exercises harder, that require minimal to no equipment – or at the very least, little more than household objects.

All the fanciest calisthenics moves with iconic status employ the laws of progressive leverage. In essence this is simple physics. The worse leverage your body has, the more work your muscles have to do. Some of the very hardest calisthenics moves have very poor leverage acting on usually weak and small(er) muscles. Examples are: 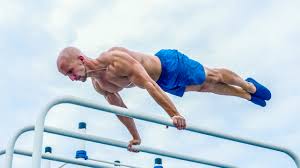 Here, the anterior delts, bicep tendons, wrists and serratus anterior muscles have to support the weight of your entire body. This requires phenomenal strength and conditioning in those areas, and is a huge reason most people will leave this life without having a clean, full planche to their name.

Virtually the opposite of the planche both in terms of muscles used/worked and the actual position itself, as is evident from the pics above. The front lever is universally accepted as ‘easier’ than the planche because it uses bigger and typically more powerful muscles – Lats and all the upper back musculature.

Those moves are highly advanced and not something I’m suggesting the layman do while off work in their home workouts. But nonetheless we can apply our leverage principle to many basic bodyweight movements……….

For push ups, you can either shift the shoulders ahead of the hands and wrists, forcing the front delts to work WAY harder than in a regular push up;

Or, you can elevate the feet and force more way through the hands that way. By doing the latter you begin to work through the handstand push up sequence hierarchy. Once your body gets close to a 45 degree angle, it’s time to switch to full pike push ups and then work the feet higher in this movement pattern – which will eventually result in wall facing handstand push ups, should you persist long enough. Have you got the staying power, though? Huh?

(The feet elevated pike push up)

Similar applications can be made to rowing movements, as raising the feet can make things exponentially more difficult. Even a mere 6 inches can drastically alter things, so don’t let anyone tell you 6 inches isn’t enough.

Other examples would be on moves like glute bridges, where you can slide the feet further out from the hips and thus, decreasing the leverage of the leg  muscles used, and making them work harder in the process.

These are very basic examples and when one has a solid understanding of exercise physics, you can apply this to far more movements than you may think.

‘Range of motion is king’, said far too many world renowned coaches to list, but usually people complain about a full range of motion being absent in one’s training. However, few realise range of motion can actually be progressed and is yet another variable of progression under your control.

‘Strength through length’ is another saying I’m a big fan of, and how strong you are in the extremes of the range in a movement or resistance curve, is a true reflection of strength in my eyes and another way of being bullet proof, and avoiding injury.

Some practical examples are placing the hands on books, blocks or using parallette/push up handles, which allow the chest to travel below the hands and stretch the chest more……

Using rings or chairs as opposed to a table where your chest will only travel as high as the table allows, whereas the rings or chair edges will allow you to fully retract the shoulders and elbows as far as possible, giving you a tasty back contraction……..

Some lower body examples are elevating the feet slightly for moves where you’re hinging at the hip, increasing the stretch on the hamstrings, or squatting to a box or object that’s progressively lower in the case of beginner squats or even those working through the single leg squat progressions.

Tempo is the speed at which you perform a movement. You can manipulate it to modify the training effect. The simplest way to do so is to slow down the eccentric (lowering phase) to a more pronounced speed – between 3 and 5 seconds.

You can also add in pauses wherever you wish. Usually the best place is the weak point in the range – think bottom position of a squat/push up or the top position of a row/pull up. Of course the concentric (lifting phase) can be slowed down too and is actually good for working on strength in the contracted range, as the muscles aren’t exploding up from a lengthened position.

Just keep in mind with tempo, the total time under tension for the moves you’re doing. 10 push ups just going up and down could take hardly more than 10 seconds, whereas 10 push ups on a ‘3-1-X-0’ tempo will take somewhere around 40/45 seconds total, if you execute them correctly.

This is a great dark horse that I love for strengthening specific parts in the range of motion. These have also been called ‘double barrel’ reps. Like the name implies, you do a full rep, then add half a rep, finishing with a full rep. So in the case of a pull up you would pull up to the top, lower halfway to where the elbows are at 90 degrees, pause and pull back to the top then lower all the way down. This is one rep. Repeat for reps.

You can squat down, pause and rise to a quarter/half of the way up, return to the bottom and drive back up. The exact premise can be applied to push ups as well or any move within reason.

Incidentally, this method is brilliant for strengthening the top position of a pull up – a weakness for almost everyone!

Muscular balance is almost the magic unicorn everyone’s been looking for all their lives, kind of like a girl who actually shows who she is in the first 3-6 months of knowing her. Anyhow, I digress……..

Obviously it’s impossible to be perfectly balanced and your body will always have a preferential side, BUT, many of us have glaring differences in strength and function from side to side! And uni-lateral work is the remedy for this, obviously. What’s also neat is uni-lateral work brings down the need for overall loading, which in addition to working on imbalances from side to side, lowers the overall stress on the body.

The sheer fact you’re having to do reps on both sides means the workload goes up as the reps are doubled, too. One could argue that is a progression in itself!

One of the problems with uni-lateral training is people assume it’s a case of all or nothing; that there’s no mid ground. You either do a one arm push up or a two arm push up. The same can be said for many other moves such as squats, rows, pull ups etc…..

Simply deviating the non working arm from the center will shift more body weight through the working arm. An example of this is if you were working on your right arm, you would shift the left arm out from the mid-line gradually to where eventually, you would have a straight left arm. At this point 75% of your weight will be going through the right arm/working arm. From there, you’re not far away at all from concentric reps on the single arm, completely unassisted!

(Example of an archer chin up on rings. Note the weight shift)

And if you have hand weights, moves like one arm dumbbell rows, one arm floor presses, single arm shoulder presses will all reduce your need for heavy dumbbells or barbells as your home dumbbells should be sufficiently heavy.

These times are odd and uncertain. Normality as you and I know it has been totally turned upside down, and even those of you who said they’d love a month off doing nothing are probably already antsy. Never before has exercise been the magic potion to save your mind. Don’t let the negative thoughts and the naysayers tell you there’s no point training at home………you’ve now got 5 different variables to apply to keep the body strong and adapting.

Keep your spirits up and do everything out of self love. Support those who support you and don’t let the disappointment of how indifferent the world seems to be at this time get to you. This will pass and you’ll be better for it. Everything is a choice.

If anyone needs support or help with ideas for their workouts, leave me a comment or drop me an email: straighttalkingfitness@gmail.com.