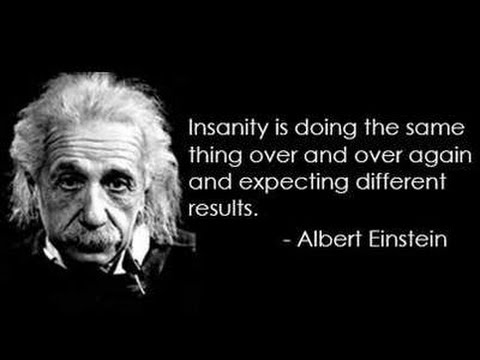 If you ever want to make something of yourself, you’re indoctrinated into the philosophy of having to do and practice said thing over and over until perfection is found.

But how does one define repetition? Does it really mean do the same thing over and over until you ‘make it’? Or is the term vaguer? Is there more to success than simple and defiant repetition? The scope of this post will centre around fitness but the premise and principles you’re about to read really do apply to every area of life and human achievement.

A world of myths

The fitness industry is a collage of hilarious myths with some real beauties like:

HA. Man, I found it hard to stop there!

Most of those are well known and not new by any means, especially for those who’ve been in the trenches for years. One not so obvious myth that I’ve learnt recently is that to improve your performance on an exercise, you must hammer away at the exercise in question.

Guys will train for a bigger bench press by constantly maxing out the bench press. Then wonder why they spin their wheels. They don’t address any weak points or scale the volume/intensity, rotate the exercises or give any thought to their training. If they grind it out enough, it’ll happen. That’s their optimistic philosophy. Tell them to train their overhead press instead for a while or to bench lighter, with a focus on speed and they have a nervous breakdown.

“I’LL LOSE WHAT CRAPPY LEVEL I HAVE AT THE MOMENT! I DON’T WANT TO GET WORSE!”

The only tried and tested way to deal with fear is to face it head on. 4 hesitant, reluctant and apprehensive weeks down the line they retest their max on the bench press and find they’ve either beaten their 5 rep max or got a new max!

I have literally lived this phenomenon over the last few weeks. Post shoulder injury I had a bee in my bonnet about ring muscle ups. I would train sets and sets of max rep/effort muscle ups and found whatever I did, I was plateaued at 4 reps. Instead of solving the training obstacles of others it was time for me to sort myself out. Ring muscle ups themselves were tossed into the trash (although I never lost total sight of them) and instead, I focused on false grip ring rows, deep ring dips and explosive bar pull ups……

Weeks later I randomly thought it would be a good idea to try some ring muscle ups as I was feeling good. I managed 5 reps on my 3rd set! The first couple of sets I just stuck to 3’s and 4’s; didn’t want to max out. When you keep in mind I’d already trained earlier that day and had done a day’s work too and sets prior, this is no mean feat and is testament to the case I’m making: you must take a step back (intelligently) in order to keep trudging forward.

Did I lose muscle? No. Did I lose strength? No. Did I not enjoy training? No. Why didn’t I do this sooner? Because my ego wanted to do ring muscle ups all the time and stupidly thought supplementary/alternate work was a waste of time. Much like our bench press warriors from earlier……….we think the ego helps us by wanting to do the big stuff and cool stuff all the time. Really the ego is the biggest traitor of all. It’s an evil bastard and one that will keep you in mediocrity unless you slay it once and for all.

Look and you shall find

There’s no comfort like reassurance and if we look across the scope of the fitness, movement and health world, we see countless examples of ‘achieving indirectly’ as I call it.

Emmet Louis coaches his students to handstands not by getting them to continuously do handstands all day, he has them work on their overhead mobility. They will mobilise tight areas and strengthen the requisite muscles required to support a good stable overhead position.

Ed Coan, one of the greatest powerlifters of all time increased his already big bench press by developing his behind the neck press, not by just bench pressing. Ed realised he was limited by the strength of his delts and rotator cuffs and addressing this allowed him to destroy his bench press plateau.

In the calisthenics game plenty of guys have got their front lever by improving their pull up and muscle up strength. Instead of training the lever itself perpetually, they got to levels where they can do 20+ pull ups and 10 muscle ups – with clean form – and found their front lever was substantially better.

In conclusion, you should never be worried about leaving an exercise or a goal alone for a short space of time. The body doesn’t detrain that fast and if you make wise substitutes you will find you actually progress without boredom and frustration.

If you would like more info on programming your workouts, guidance or online coaching, please shoot me an email at: straighttalkingfitness@gmail.com

Straight Talking Fitness The Full Circle Of Fitness – Stop Doing Something To Get Better At It?
%d bloggers like this: