A deadlift to the exercise kingdom is like the blue whale to the animal kingdom; biggest, heaviest and most intimidating. With notoriety comes myths, legends, hearsay and folklore. In this post we will look at some flat out myths, find the truths and even touch upon some unknown facts. Strap in and enjoy the ride!

“Deadlifts work every muscle in your body” – true or false?

The deadlift is a posterior chain exercise, but what about the anterior chain? The anterior chain is hardly ever mentioned or written about, generally due to the fact there’s very few movements entirely targeted to it as a union. The posterior chain consists of all the muscles on the rear of your body. Or put simply, muscles you cannot see in the mirror.

Many anterior muscles are stimulated via the deadlift but to the degree of which often gets lost in translation. Few people even realise the quadriceps are involved with the initial phase of the deadlift. They are. Although You will never get the best ‘wheels’ (quads) by just deadlifting.

And what about the show muscles; biceps and chest?! Will those ‘lady magnets’ be up to scratch by just deadlifitng? Hardly. The pecs and biceps are in a lengthened position during all sections of the deadlift. The arms are simply hooks and the tendons are bearing more of the load than the biceps themselves. The triceps are loaded, sure. But the biceps are chilling out and having the night off.

(RELATED: What about ‘hook grip’ Deadlifts? )

To really maximise your potential you need more than deadlifts done solely.

“Deadlifts are dangerous and too risky” – true or false?

Absolutely anything has the potential to be dangerous in the right circumstances. Going out into your back yard is dangerous if you do it blindfolded at high speed. Conversely, parachuting might be thought of as scary, dangerous and terror inducing. When in reality the ratio of accidents to jumps is tiny – as little as 5 in every 100,000.

Because of the amount of precision involved with minimising risks and safe execution. They don’t just throw people out and hope they land on both feet, they have parachutes, harnesses, safety cords and trained co-jumpers.

If you have respect for the laws of deadlifting then the lift is totally safe. The laws are simple, universal and as follows……….

CNS Definition: the complex of nerve tissues that controls the activities of the body. In vertebrates it comprises the brain and spinal cord.

Central nervous system fatigue is a controversial topic. Some will fight to the death in argument of it being completely mythical. Others will swear they’ve suffered from it and that it’s a creature with many confirmed sightings. One cannot deny how demanding the deadlift is to the CNS. The sheer amount of musculature involved coupled with the deadlift being a ‘load friendly’ lift; you can typically lift the most weight you’re ever likely to on a deadlift as opposed to the bench press, makes it very taxing indeed.

How taxing depends on many variables – how strong are you? How often do you deadlift? How’s your lifestyle outside of training? How close to absolute failure did you go?

And when we acknowledge the dead stop nature of the deadlift it gets worse. You have to overcome huge loads from a dead stop which requires an enormous amount of energy from your body.

The stronger you are, the less frequently you’ll be able to lift maximal or near maximal loads. Deadlifting heavy once per week will be more than enough for anyone decently strong: 1.5 – 2 times bodyweight. Above 2 times bodyweight and you may need 10 -14 days. And if you’re chronically sleep deprived and living off stimulants then the deadlift will be very difficult to recover from and you may feel like you’ve been steamrollered the day after.

(RELATED: Strength was, is, and always will be relative)

Failing a deadlift is something I’m proud to say I’ve never done. And I’ve done many foolish things such as failing heavy squats, being buried under the bar when bench pressing and more. Yet I’ve never failed a deadlift. You shouldn’t either. To fail a deadlift means you literally hardly break the bar off the floor. However, I would go as far as to say ANY breaching of the laws mentioned earlier would be classified as failing a deadlift.

Even if you don’t fail a deadlift you may find your strength takes a real hit on your next session, regardless of what body part you train. If you go heavy enough you’ll feel an onset of fatigue which can take quite a few days to subside. I recently went back down memory lane for old time’s sake, and done some deadlifting at over twice bodyweight for reps, which left me feeling subdued for multiple days following.

“You can’t build a great physique without the deadlift” – true or false?

Just because the deadlift is so fierce and intense and raged about, doesn’t mean it has no competitors. It has plenty. I will agree that it’s hard to match for spinal erector development, but power cleans can rival it in that department. For upper back development, pull ups and rows (any variation; pendlay, bent over, one arm or inverted rows) can definitely rival the deadlift, maybe even better it.

The glutes and hamstrings can be tackled by many alternatives. One is the deadlift’s cousin, the long forgotten gem: The Romanian deadlift. 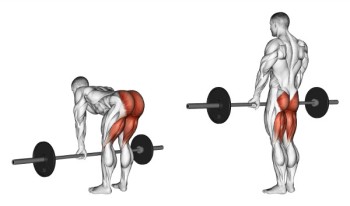 This has a greater stretch reflex and a larger eccentric component than the conventional deadlift. These factors make it much less taxing to the CNS.

Sprinting…….my old mistress…….sprints call on the glutes and hamstrings massively and can produce impressive growth when practised consistently.

Note: You can find more examples of hip extension (glute & hamstring) exercises in the article linked above.

Even the upper traps can be stimulated from exercises like cleans, high pulls and other Olympic variations. What about heavy farmers carries? Nobody does them, do they?? Direct trap work in the form of shrugs is very effective too.

When used synergistically, many exercises can produce much better muscular development than deadlifts alone.

“Deadlifts are the ultimate gauge for strength” – true or false?

Strength should never be judged on one movement, or pattern of movement. When it comes to big compound movements used in powerlifting (like deadlifts), leverages play a huge part in how efficient you are in a lift. For example, I am short limbed and find the bench press and squat easy, although the deadlift isn’t my nemesis, it’s not the most natural movement for me. If I were long armed, I’d find the deadlift much easier as the extra arm length shortens the ROM (range of motion) due to there being less need to bend over to reach the bar.

Some of the all time greats in deadlifting were very long armed. So much so, that when they would lock a heavy weight out at the top, the bar would be just above the knees!

The deadlift is a fine exercise. It’s a brilliant teacher of spinal awareness – where your spine is during exercise. It encourages better posture and is an assessment tool too. When you watch someone deadlift, you can determine much about them structurally – if you know what to look for.

The deadlift can also take you to great strength levels and give you lifting confidence. But by the same token it should never be seen as compulsory. Exercises are tools. The job decides what tool is needed and a tool is only as good as the person using it.

You need more than a cement mixer to craft a mansion.