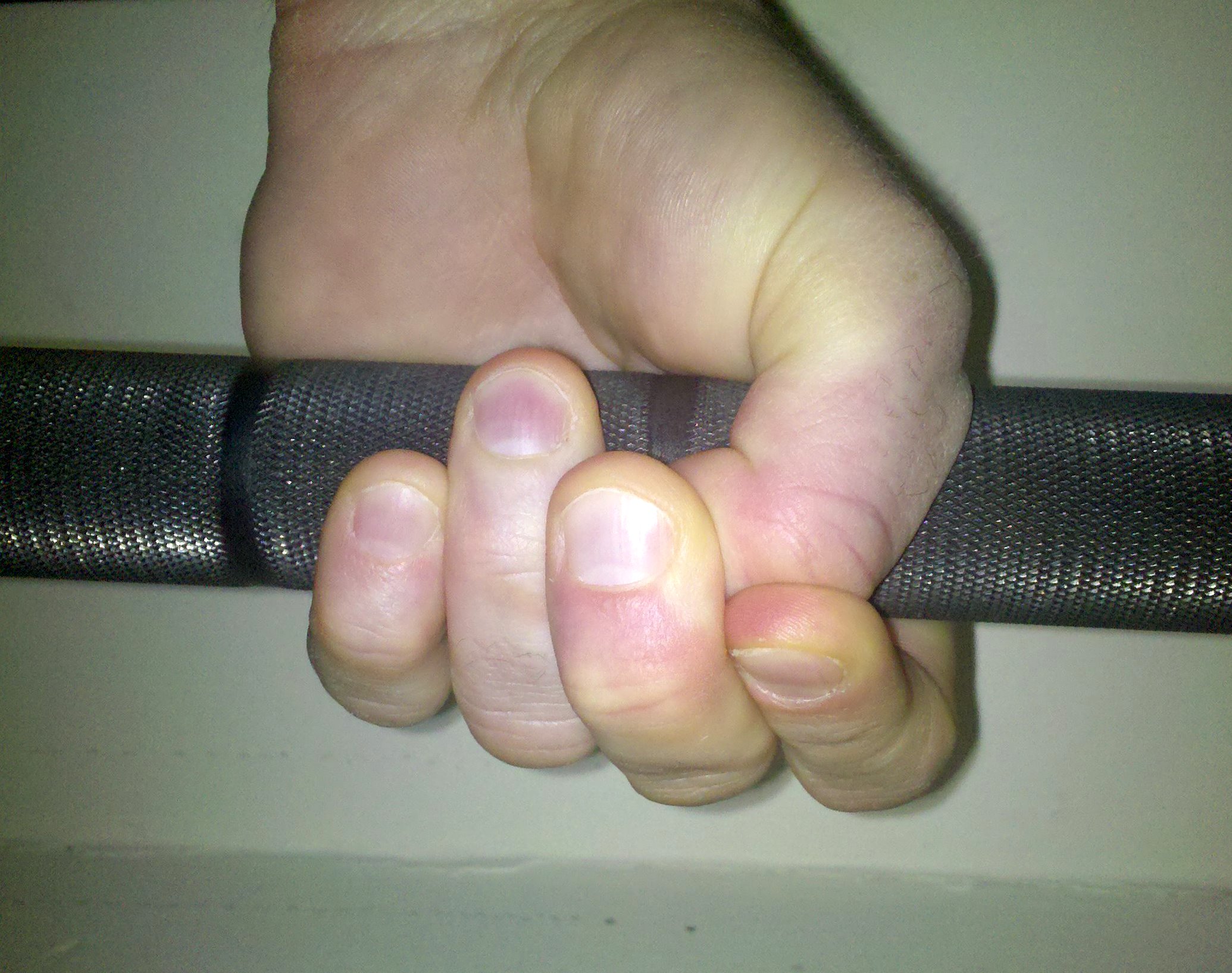 If there’s ever a culprit for the biggest limiting factor when it comes to the deadlift, it’s your grip – or grip strength. Granted, this only really plays a significant role when you reach reasonable strength levels (1.5 + times bodyweight) but the standard, double overhand grip with the thumbs around the bar only stays loyal to you for so long. Once it lags behind your glutes, hamstrings and spinal erectors in terms of strength, it’s time to find a ‘void-filler’.

There’s generally three contenders: The mixed grip, lifting straps and the hook grip. The mixed grip is used most; one hand is supinated, the other is pronated (traditional grip). While the mixed grip seems mighty fine at first glance, when the ante is upped and you use heavy enough loads – over 2 times bodyweight – you’ll find some obstacles.

The asymmetric grip can lead to muscular imbalances – as if we don’t have enough of these already! And I know the imbalance ‘risk’ is only slight, but once things get serious (lots of experience deadlifting/using impressive loads), it certainly becomes more apparent. Try deadlifting over two times your bodyweight with the mixed grip and see if you don’t feel any spinal torsion. Symmetrical arms just feels far better when you get in the realm of over 2 times bodyweight.

The bigger risk of the mixed grip is the potential to tear your beloved guns (biceps). What would you do then? Those tight shirts will have to collect dust in the wardrobe! But the reality is, many people have torn their biceps while pulling with a mixed grip. This isn’t to say it will happen. But it can. The safety net here is keeping the arms fully extended – even more so the supinated arm. It makes sense, the load will be multiple times greater than you could ever curl; your tiny biceps cannot possibly stay flexed under such weight and will thus be forced into extension. In other words, over-stretched/torn.

Another very viable option is lifting straps. These bulletproof your grip to the point where grip strength will almost never be the limiting factor. And of course, you can maintain symmetrical arms. Obviously you have to actually have your own straps and bring them with you to the gym. We’ve all seen those using straps as though they’re a fashion accessory. They strap up as soon as they enter the establishment. They use straps to hold on to the calf machine handles. Rumour has it they keep them under their pillow at night to make better gains.

The downside to chronic strap use is much like chronic pre workout use, dependency. It’s just easier to use straps even on lighter sets. And accordingly, your grip stagnates and becomes even more of a weak link than it once was.

The solution? Use straps when you absolutely have to. It’s that simple.

Finally we arrive at the third option, the hook grip. This is slightly ‘underground’ and somewhat rare – particularly in mainstream gyms. Although among powerlifting and Olympic lifting circles, it’s common knowledge. The great thing about the hook grip is you need no equipment and it utilises symmetrical arms.

(crossfitfbo.com) – the thumb sits INSIDE the fingers

From a personal anecdote, I had known about the hook grip for a long time but shied away from trying it as I had heard all the horror stories of people sacrificing their thumbs in the process. But I love an experiment and began using it when I just couldn’t hold the bar without bar-roll (once I go much over 300 lbs) and found it works beautifully! Also, the ‘thumb discomfort’ is way over-hyped. The bar feels solid in your hands and if you like a bit of fun, you can trick people into thinking you’re pulling massive weights with a standard double overhand grip. Not that I’d ever do such a thing.

In summary, the hook grip has been a great addition to my workout toolbox. I like it far more than the mixed grip and I don’t have to lug straps around with me. Winning.

Have you used the hook grip? Are you a fan? Which of the three gets your vote?

It’s the hook grip for me.

13 thoughts on “What about ‘hook grip’ Deadlifts?” Leave a comment ›