The muscle up lays down a marker. It demonstrates multiple abilities; skill, strength, coordination, and it’s a party trick of sorts too. It featured in my recent post, ‘5 SERIOUSLY challenging calsithenic movements – can you do any of these?‘

And it’s not difficult to see why it’s so popular either. It has flexible rules; you can swing and kip like crazy but as long as you get to the top of the bar, technically you’ve done a muscle up. Also, it’s a hybrid combo of two household names in upper body calisthenic movements, the pull up and the dip – what’s not to love?!

This is a condition that’s pretty much compulsory once you get your first EVER muscle up. “I WANNA DO IT AGAIN! AND AGAIN…….AND AGAIN!” And of course, it’s customary to tell and show everyone wherever possible. Swing parks, lampposts, garden furniture frames……..anything with a straight bar that supports my weight = MUSCLE UP TIME BABY!

Can you relate? Muscle up mania tangles us all up much like a new relationship. You’ve got them to notice you. You’ve got them to say “yes!” You’ve took them out; it went great. Give me more please! It’s that dopamine release associated with the new. In simpler terms, excitement.

Even if you’re not in the muscle up club at present, you’ll surely admire one when you see it. You’ll even be forgiving on the form front. Even ‘chicken wing muscle ups’ may get your thumbs up.

And what’s a chicken wing muscle up?

Chicken wing muscle ups are a slang name for less than stellar looking muscle ups. Or, in more specific terms: A muscle up in which the transition phase is out of unison; one arm is ready to be extended before the other. Sound familiar?

The Chicken Wing Muscle Up in motion. Damn that right arm!

The reality is almost everyone’s very first muscle up (still counts, just!) comes in this form. And all that pride and unjustified arrogance mentioned earlier soon becomes masked by the arrival of something very unwelcome and something all lifters, be it bodyweight guys or barbell guys, shudder at the thought of…………

Chicken wing muscle ups are the arch enemy of your elbows. They make them cry. This is personal experience talking, it’s no fun. But, as they say, everything happens for a reason. The reason in this case is the joints and tendons aren’t conditioned to the movement. Tendons and ligaments strengthen and recover far far slower than muscles. It sucks but it’s true.

The muscle up is a velocity movement – even more so for beginners (kip needed) – so it stands to reason the elbows will have to withstand plenty of force. In fact, ultra strict, slow muscle ups are far more elbow friendly than kipping muscle ups. Any time you increase the velocity of an exercise, you increase the force through the joints in accordance. This doesn’t make high speed exercises bad, you just need to have respect for them. They have no remorse for ignorance.

The origins of the chicken wing

Ultimately summarised, the chicken wing muscle up can be attributed to…..

Often times these are all rolled into one. Although we now know some causes, we can draw up some possible cures.

Resist the urge. You’re strong enough. I know it’s hard, and I know you’re petrified you’ll not be able to get to that glorious top position ever again, but your fears are unjustified. Chicken wing muscle ups are hurting you, not helping you. Be safe in the knowledge that you do indeed have sufficient strength to do a genuine muscle up, you just need some refinery.

One of the greatest quotes I ever heard about mastering a craft was from the calisthenics master that is Al Kavadlo.

“When I look back over the last 5 years, I was able to do muscle ups, human flags, pistol squats, L-sits and front levers back then. It may seem to some to be devoid of progress, but all those movements now, look far more picturesque in comparison. You can see how much I’ve refined these skills since.”

If refinery applies to someone of Kavadlo’s pedigree, it’s likely to be applicable to you and I. There’s never a true ‘end zone’ – especially with calisthenics!

With this in mind, we can approach beginner muscle up training with a long term picture in mind. Rather than gritting your teeth through repping out chicken wing muscle ups, I advocate a different, more superior approach………..

A top down approach

Using the age old training concept that is eccentrics. Eccentric training often gets scoffed and sniffed at these days, but it’s as old as iron itself and it’s effective! Using eccentric strength to build concentric strength has been used for decades and decades and it applies to the muscle up just like it would apply to squats and bench presses.

All that’s needed is a bar of around sternum to shoulder height so that you can jump up slightly and extend your arms to the top position of the muscle up. From there it’s a game of lowering as slowly and as controlled as possible. Once you reach the bottom of the ‘straight bar dip’ section of the muscle up, next comes the nasty and infamous transition phase.

It’s here that you’ll usually see people swing down violently like a monkey and end up way in front of the bar. While that’s fine for repping out muscle ups at all costs (Crossfit), for our purposes we want the opposite. We want to dominate the drop down – not let it dominate us.

As soon as you lower into the hang position, let your feet hit the floor and jump up once again; rinse and repeat. Aim for 10+ slow and controlled eccentric reps. Whilst doing this, get familiar with the hands revolving around the bar as you lower. This is another stumbling block of the muscle up and culprit for chicken winging.

Another banana skin to dodge when going for muscle up mastery is neglecting the quest for progress strength-wise in both dips, pull ups and even core movements. You can’t just practice the muscle up 24/7. You need to keep driving your numbers up cyclically – progressive overload.

And finally we arrive at practice. Practice practice and more practice. The further you move along the scale of advancement with bodyweight movement, the more time must be invested. Movements such as the planche can take up to 3 years to perfect! 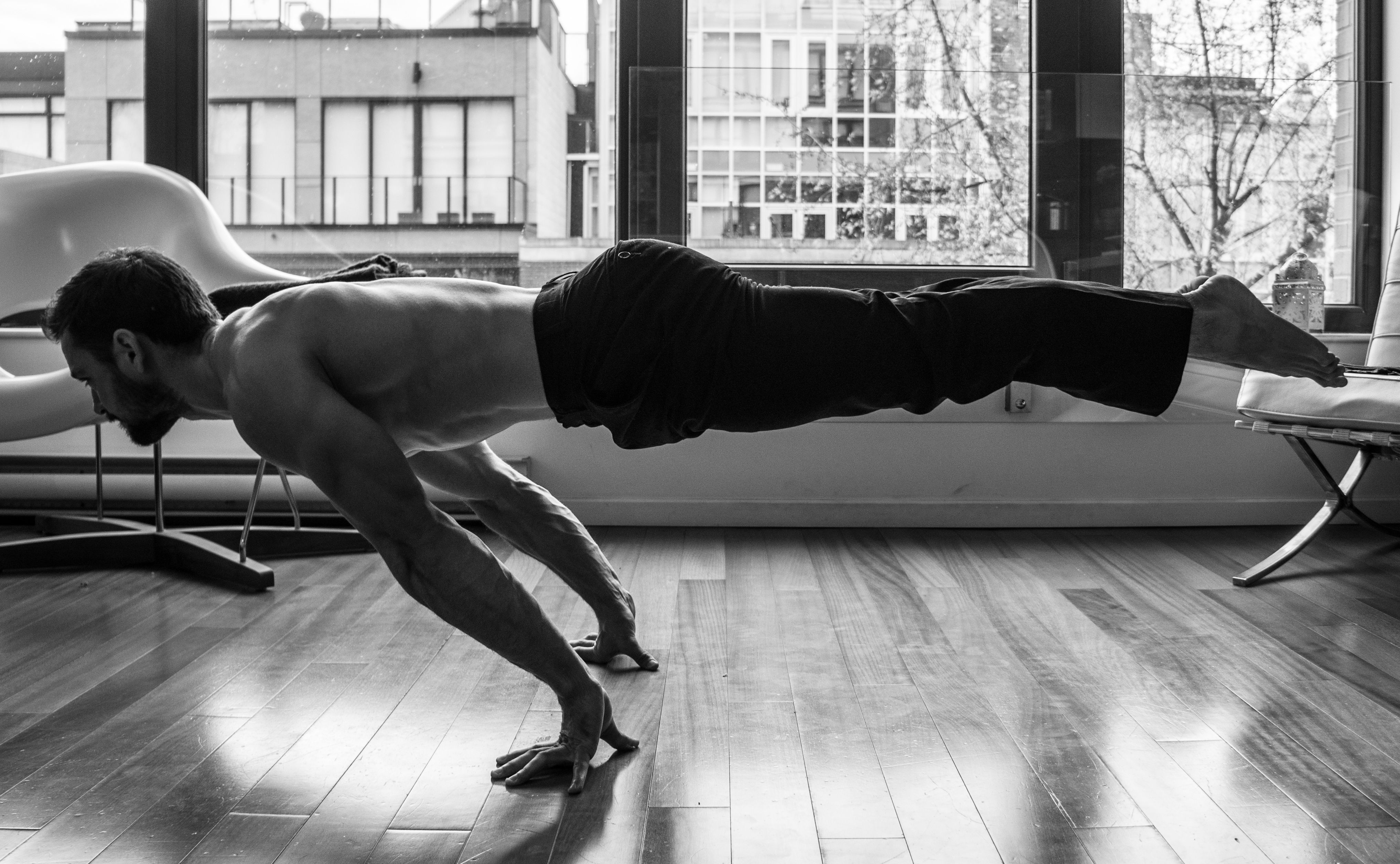 As you get better and better at eccentric muscle ups, you can begin using the momentum swing to snap back and drive yourself over the bar and thus, complete a muscle up. Your time will come.

I’ve been through crippling elbow pain that lasted hours after I messed around doing chicken wing muscle ups, it’s not worth it. Take a brief step back and keep mastering the prerequisites first. Your elbows will thank you.

NOTE: Anyone looking for a SOLID calisthenics based program that will help you build a better foundation for muscle ups, levers and more…..be sure to check out my recent review of Calisthenic Movement’s Program

4 thoughts on “Muscle up tips for beginners” Leave a comment ›