Supersize ME: The controversial, daring and ever so intriguing documentary themed movie of 2004 (starring Morgan Spurlock)

What would happen if a man were to eat nothing but McDonald’s products for an entire, strict 30 days?!

Most have seen it, those who haven’t undoubtedly have a sound knowledge of its content. I’ve a confession to make, it took me some nine years to finally jump on board the “bandwagon”. However, it was always sitting in the rear of my mind as something that I’d like to explore.

I mean, lets face it, an ever so slight hypochondriac coupled with the fact that I’ve never been a huge advocate of McDonald’s. You could say I was a prime audience target!

It’s 2013 and I’ve finally managed to watch the film that sparked so much interest, debate, discussion and at the very least…….raised plenty of eyebrows! All be it way back in 2004. My first time observing the film was great, it’s full of fascinating facts about the demographic of the McDonald’s franchise, including some more shocking facts about the nutritional aspect of their food (I’ll delve deeper on that a little later) including some alarming figures concerning the consumption quantity in the United States!

Once is never sufficient!

Doing, watching, reading…..anything for that matter! Done once is never optimal for maximum information retention. The classic movie; Supersize ME is no exception. So just a week ago in fact, I sat down nice and comfy with some family and endeavoured to revisit the classic film. They had never seen the movie before and I had firmly reassured them they wouldn’t be disappointed! So my second time around, many of you may question the purpose of watching a film twice. But, let me remind you how common it is for many folks to watch their favourite films…..5, sometimes 10, sometimes in excess of 10 times! Pretty fanatical right?

Watching a film such as Supersize ME twice is not quite so fanatical, because it’s predominantly an information and fact based film. There’s much to be taken away from it. On my second visit to the film, it was amazing comparing what had remained in my conscious memory from the initial visit, to what ACTUALLY is on offer in terms of fascinating information!

Just like when you’re studying for an exam and you painstakingly revisit the textbooks to re-assess all you’ve learnt and you often get a rude awakening to what may have been missed and may have subtly escaped your conscious mind, thus reinforcing the importance of checking numerous times. Watching this great film really hammered home how much the brain can miss or simply discard information. A prime example is how us bloggers know it’s never a great idea to only read over our posts just the once! 😉

With all the vast and underground facts and figures outlined in Supersize ME, I was inspired to outline some of the brilliant and somewhat disturbing facts.

Here is a summary of what can be learned from Spurlock’s great piece of work regarding America’s beloved fast food franchise:

There lies the foundations for the experiment.

As you can see, the rules are strict and rigid. Everybody involved with Mr. Spurlock advises completely against his experiment. Armed with 3 independent doctors to monitor ALL changes to his body, both internally and externally.

Let’s now outline the effects of the 30 day documentary from a health and physical standpoint. Here are some key changes Morgan Spurlock experienced:

You really don’t have to have any interest or in-depth knowledge of health and nutrition to agree and realise just how much DAMAGE Morgan Spurlock induced on his body. One of the slightly less dominant facts from the list that stood out firmly for me, was the average calorie consumption! 4986 calories on average everyday, divided between a staple 3 meals. It’s the sheer size (or in this case, lack of) these meals that astounded me most. As anyone who has watched the film will have seen…..he didn’t eat all that much food!

I myself follow a high protein, high fat, fairly low carbohydrate diet of which I eat 2500 calories per day across 4 to 5 fair sized, clean meals. I can certainly conclude that my daily diet consists of more food than Morgan’s McDonald’s diet. Not to mention the woeful lack of nutritional value to that whopping 4986 calories, consisting of mainly the classic “empty calories”……high carb, high fat, BUT, high omega 6 (trans fats) known to trigger all kinds of in-humane diseases and health issues. 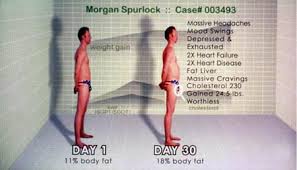 This image is a superb demonstrator to any basic spectator of the “transformation” encountered by Morgan Spurlock.

Some demographic facts and figures regarding McDonald’s (2004):

I can proudly state; I have not eaten ANY McDonald’s products since mid 2012.

Ever since overhauling my health, fitness and lifestyle. McDonald’s has been firmly eradicated. I have not even set foot in any establishment at all connected with McDonald’s for around 2 whole years. Watching and observing all the points outlined in Supersize ME confirms just how great a choice I’ve made! That’s not to say I’m insisting you avoid McDonald’s for all eternity, but you should take significant note of the alarming issues that Mr. Spurlock developed whilst on this “diet”.

What I find most bizarre……

Is I actually have many friends who have watched the film in question and consider it a very good movie. They are also aware of all the facts I’ve outlined. Yet, they STILL eat at McDonald’s numerous times per week! Sometimes up to five!

That to me is barbaric!

Not to mention the awfully poor value for money that this fast food retailer provides. Here in the U.K. if you were to visit McDonald’s as a family of 4, it would cost you around or close to £20 to feed everyone. That equates to around 35 U.S. Dollars! The amount of food which you get for that money is minimal to say the least. But, the most minimal of all is the nutritional value! Which is next to NONE.

Of course, when you’re on the road, hungry and strapped for time or options, sometimes you may have to resort to McDonald’s.

But ask yourself: Is this really the best choice I can make?

6 thoughts on “Memory lane: Supersize ME!” Leave a comment ›