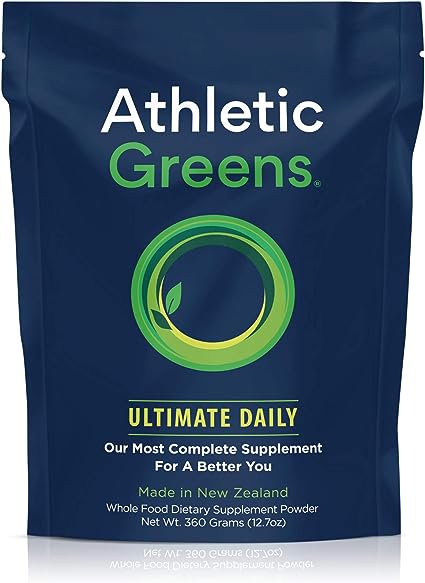 There’s not much I haven’t tried. I’ve done all kinds of experiments from sexual abstinence to cold showers only, to pure paleolithic eating to intermittent fasting, to high carb/low(er) carb diets. I’ve gone totally caffeine free and have even had spells of being highly caffeinated.

Veganism next, you might say, or keto? Well, truth be told, I’ve toyed with the idea of trying both but at present, physical performance is the biggest priority and neither of those diets support that (in my opinion), so we’re left with a more modest experiment for today’s review!

Athletic Greens has been around for years now and is recommended by many gurus. Obviously you have to be careful listening to public figures when it comes to product recommendations due to the all too common financial connection the often have………

But generally speaking, Athletic Greens is recommended by some really well renowned and respected figures. It’s quite easy to see it’s one of the best greens powder products on the market and its substantial market price/value reflects that – 104 Euros per 30 serving packet. However there’s precious little the product doesn’t have in its mineral & vitamin list……….

Obviously it’s not the be-all-and-end-all of supplements and the answer to all your problems as not every mineral is available in significant doses. Take magnesium for example, being only available in trace amounts as far as recommended daily totals are concerned. Having said that, you’re not buying Athletic Greens to correct a magnesium deficiency, you’re buying it as an insurance policy against possible deficiencies.

Which does raise the question……..

I’m no veg phobic but unless you’re eating absolutely everything under the sun, you will not be getting ideal amounts of all vitamins……….and let’s say in some miraculous circumstances you were able to cram in every vegetable & fruit into your weekly food turnover, are you even digesting all of the nutrients?

I’ll keep this as on topic as I can but soil quality isn’t what it once was and on top of that, how you cook the produce has an effect on the nutrient quality as well/bio-availability. So it’s easy to see it’s not as simple as 500 grams of Broccoli provides 100 mg of calcium. It will vary wildly. Where the food is grown, how it’s grown, your digestive capacity and how you cook the food are all factors influencing just how ‘nutritious’ your produce is.

And in the athletic population – encapsulating obviously competitive athletes/sports people and even those who train recreationally – the loss of minerals is more pronounced than in the inactive/untrained population. Obviously this is the niche that Athletic Greens tries to cover. But it makes sense!

With a high training volume and a somewhat limited taste for veggie varieties, this was me and I figured it was worth a try!

It’s well documented AG tastes rather nice for a greens product. I can only echo the sentiments of other reviews. I found it to be pretty pleasant overall, far nicer than things like spirulina, wheatgrass etc……

It has a slight sweet taste to it despite the negligible sugar content, and it actually became something I quite looked forward to each morning on an empty stomach (technically the afternoon as I intermittent fast). Obviously with supplementation placebo is almost more powerful than the product itself, depending on the faith of the consumer and of course, I was quite optimistic AG was a good product anyway. This is important to keep in mind.

Overall I felt pretty good considering the massive amounts of training volume I done over the time-frame I was taking AG. I would say there was a general feeling of more energy compared to the months prior, BUT, the months prior were the dead of winter and I’ve always been notorious for suffering in the dead of winter, with December being a particular hatred of mine. So again, how much is down to increases in daylight and overall mood and how much is due to AG?

Tough to accurately decipher. However, I did notice my skin looked slightly better whenever I’d talk to the cam for hypothetical YouTube vids. Not that I had ‘bad skin’ but I’d watch the footage back and think I had a slight glow to my complexion I’d not seen before.

Will I be re-ordering?

Not straight away. I think what I’ll try is cycling off for a month or so and then trying again, and therefore seeing whether or not these improvements were figments of an excitable imagination or not.

Obviously the price isn’t cheap by any means and it’s for you and your bank account to determine whether or not AG is for you but overall I’d say I rate the product. It was enjoyable to drink and gave me peace of mind that I was getting more nutrients than I’d otherwise be doing. Of course, all of this was in the context of a pretty solid wholefoods diet around 80% of the time or more. If your diet is lacking, obviously AG can’t be expected to pick up the slack completely but it’s a sure starting point.

What experiment/trial do you want to see me do next? I’m open to all suggestions and am actually quite intrigued as to whether we can drum up some whackier ideas than my limited creativity can comprehend!