A new instalment of the Overlooked Movement series has been a long time coming. This is a series where I do my utmost to revive certain exercises and movements in the eyes of today’s gym-goers.

Push up variations and progressions

We’ve seen plenty of upper body compounds make the growing list so far, therefore it’s high time we give you some great lower body movements to utilise for your next leg day. Which, by the way, shouldn’t be once per month.

How to differentiate between a split squat and a lunge

A traditional lunge is a stepping movement. You step forward and then descend by bending at the knee and flexing at the hip. You then return your lead/front foot to the start position (where the back foot remains throughout). Not to mention you can also do walking lunges, where you continue stepping forward with each leg over a given distance. The split squat however, is less dynamic and more static. With a split squat, you’re moving up and down solely; there’s no repetition of the forward step. Thus, the split squat is less of a co-ordination exercise than its cousin, the lunge.

The lunge is more of an athletic movement and the split squat is more of a hypertrophy movement. You can integrate numerous variations into lunges; twists, overhead holds, jumps and train them in a transverse plane too.

The greatest element of the split squat in my opinion is its potential for uni-lateral muscular development, which goes a long way towards eradicating common bi-lateral muscle imbalances. Not to mention the high amounts of muscular tension the movement serves up. By maintaining a relatively static position, you can really target the quadriceps and gluteal muscles by keeping constant tension on them. Whereas the lunge has a more intermittent tension pattern. This isn’t an exercise face-off, just an attempt to highlight the differences.

Exercises are tools. The job dictates the tools required.

The split squat and its disciples

The easiest and very under exploited form of the split squat is what’s otherwise known as the static lunge. One could argue the split squat should be named that. This is where the rear foot remains on the same altitude as the front foot. It’s a traditional lunge without the repetitive step back and forth. You get more direct muscle stress this way, although a lower level of co-ordination is required.

Another style is the front foot elevated variation. This will feel much more comfortable for those lacking mobility in the lower body. You don’t need any more elevation than 12 inches here – ideally lower. And finally we arrive at the traditional ‘Bulgarian split squat’ that involves an elevated rear foot. There are endless debates over just how high the rear foot should be. Usually it’s said to be the height of a traditional bench, which is roughly equal to chair height too.

While others object to this setup, hypothesizing that a highly elevated rear foot leads to an over-extended lumbar spine – which I think is somewhat valid. Personally though, I think it comes down to the individual. Anyone with an anterior pelvic tilt of sorts should probably moderate the degree of rear foot elevation, as this will likely hyper-extend or strain an already extended spine.

I really think the old cliché in the fitness world applies once again: find which variation feels and works best for you and your needs. I personally find slight elevation (4-6 inches) feels best.

With that out of the way, let’s lay down some rules for tailoring the split squat to your needs. First off this is not a power movement. A heavy 3-5 rep set isn’t the best protocol for this exercise. If anything, higher reps are best suited to this exercise. Anywhere in the neighbourhood of 8-20 reps per set. For the simple fact of safety and the difficulty involved with loading the movement sufficiently. Heavy dumbbells are safer as you can drop these should you need to. Obviously the limiting factor with dumbbells is your grip. You wouldn’t have this conundrum with a barbell, but try dropping that safely! Way too dangerous. There’s also the balance issue to be addressed too.

Verdict: Use dumbbells. The only exception could perhaps be if you already have experience with the movement and can use a power rack with the pins set ideally.

To initiate the movement, set your lead foot – the working foot around 2 strides worth in front of your rear leg. The front leg should be almost at full extension. From here, flex at the knee and hip simultaneously. All the while keep your chest and torso extended/upright. Descend until your femur (thigh) is at least 90 degrees with the tibia (shin). It’s very much like a squat in that sense; you must hit a minimum 90 degree angle to even begin to obtain the benefits of the movement.

Once you’ve reached desired depth, it’s all about the heel! Drive that heel through the floor like you’re trying to make a dent in it. Really get your mind connected with that heel drive. This fires the quad and glute nicely. Also be sure to flex both knees in unison. Depending on your hip flexor mobility, you may even get a stretch of sorts on the opposite side once your at maximal descent. If you do indeed have tight-ish hips, only go so low as you feel a gentle stretch in the hip flexor.

Knees over the toes?

Dorsi-flexion you mean. Well that depends on how mobile your ankles are and whether you’re looking to target more quad without glute, or vice versa. Done neutrally without excess forward knee travel, you’ll still get plenty of quad activation.

Although to really target the quads, you’ll need some forward knee travel. That’s why the low bar powerlifting squat gets touted as a poor quad builder but terrific posterior chain developer. You need forward knee track to target the VMO (Vastus Medialis Oblique) – which plays a profound role in building knee stability.

The weak side rule governs that you always start with your weaker side first, when training uni-laterally. Whatever numbers you muster up on the weak side, you equal it on the stronger side. Equal not exceed. This is a brilliant method to allow weak sides to ‘catch up’. Split squats are PERFECT to exercise this principle.

And one last overlooked element of the split squat…………

Everybody hates going on holiday/vacation because they worry whether they’ll be able to train efficiently. Usually they can’t. You can train, but not at the desired intensity level. Sure, some people may ‘YOLO’ it and scrap the notion of training at all. Some may time a rest week for the week they’re going away. But if you just can’t bear the thought of not using your body to oppose gravity for a week, then train you must!

Leg training can be tricky, I mean you can do hundreds of bodyweight squats but that’s not giving you the intensity you crave so badly. And you can’t pack a barbell set and take 60-100kgs worth of plates with you for a hotel room squat session. You can though, bring moderate dumbbells with you (10 kg each?) without much trouble. 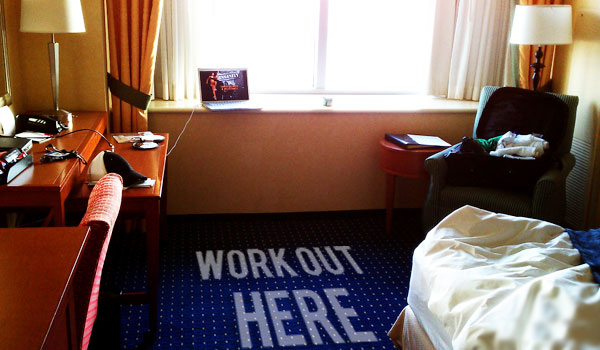 Moderate dumbbells are usually plenty of resistance for a split squat – especially if you go for 12+ reps each leg with rest periods on the more aggressive side. And there you have your holiday/vacation ‘leg day’ needs covered!

There it is, a great old school compound that targets the quads as well as anything. With athletic carry-over and remedial qualities. Not to mention the requirement of minimal equipment.

There you go boys, there’s NO reason or excuse to not train legs anymore. Even if you’re on vacation!

The split squat. Are you a fan? It’s pretty hard not to be.